TYM – Efficient, sustainable and ready to break through 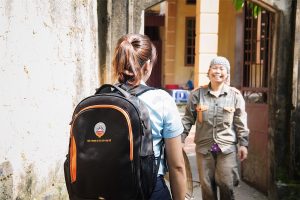 In 2018, after 26 years of operation, TYM was honored to receive “Outstanding Microfinance Institution for Efficient and Sustainable Operation” award under the Citi – Vietnam Microentrepreneurship Awards 2018 (CMA 2018). This award is recognition for the unceasing efforts of the Vietnam Women’s Union (VWU) in professionalizing TYM, balancing between its social and financial goals.

TYM originated from Tinh Thuong Fund project which was formed to support disadvantaged women to access financial services so that they could escape poverty. However, unlike other projects at that time, Tinh Thuong Fund project did not cease at the end of its agreed project. Instead, it was gradually institutionalized by VWU and separated into an income-generating unit called Tinh Thuong Fund (TYM), which was equivalent to a department of VWU. Since 2010, it has become the first official microfinance institution licensed by the State Bank of Vietnam (SBV).  At that time, VWU had already understood the “declaration” of “the father of microfinance,” Mr. Muhammad Yuns, that microfinance was not charity, but it was a business with a social purpose of helping people to escape poverty. Therefore, TYM has insisted on its mission in supporting women by providing credit – savings services and a series of social supports such as capacity building and community development, assisting customers while preserving capital. In doing so, TYM has had profound impacts: (i) increasing access to financial services among disadvantaged and low-income people; (ii) ensuring continuity and stability in providing services to the poor and near poor; (iii) and contributing sustainably and positively to the socio-economic development in general. Up to now, TYM has helped more than 120,000 women escape poverty, more than 7,000 women become micro-entrepreneurs and 15,400 women become leaders of the Communist Party and elected offices. Moreover, women who are members of TYM have become a source of inspiration for many other Vietnamese women., namely:  Ms. Duong Thi Tuyet, receiver of International Microfinance Entrepreneur Award (CMA 2011), Ms. Nguyen Thi Thanh Phuong,  Excellent Microfinance Client (CMA 2017), and Ms. Nguyen Thi Van, Outstanding Micro Entrepreneur with innovative idea (CMA 2018), etc.

In order to continue to be a reliable service provider for women’s startup and development initiatives, TYM understands that it needs to make more efforts to provide members with more suitable, safe, friendly and efficient services. Thus, since 2018, TYM has been preparing to advance its technology, human resource, and other aspects so that TYM is ready to expand its operation coverage, inserting new technology in its operation to create a breakthrough in 2019. Following the trend of economic integration and digitalization of financial technology, TYM will accompany women to assure that they gain safe access to financial services; and no one will be left behind during the development of our nation.

Share
Read more
TYM gives me a chance to be myself