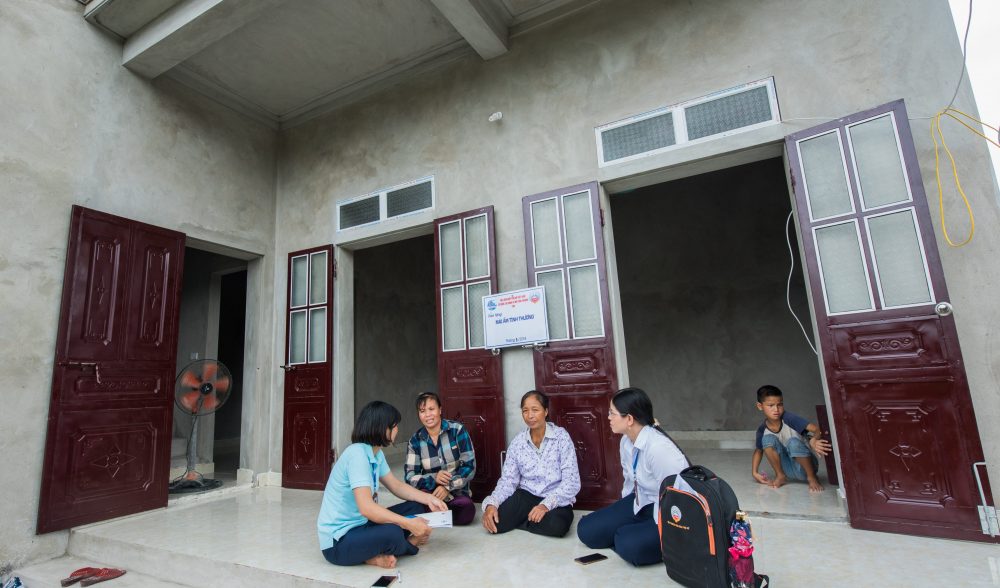 WARM SHELTERS WITH LOVE GIVEN TO POOR MEMBERS BY TYM

We visited Ngo Thi Hien family – member of center 27, Yen Nhan commune (Y Yen district, Nam Dinh province), who was supported by TYM to build “Warm Shelter” in 2018. The new house was built right next to the remained wall of the old house, which was the image that we cannot forget. Inside the new home of one of the most difficult households in Yen Nhan commune was still very simple – the most valuable asset is probably the electric fan and bike. Inviting guests with some tea, Ms. Hien informed us about her life. Hien was adopted by her mother at an early age. Mother and daughter relied on each other. Unfortunately, her mother suffered serious illness and died when Hien turn 15 years old. She lived with the help of her neighbors and she worked for other families in the commune. By the time she grew up, she found herself unable to find a husband because of her circumstances. She decided to become a single mother. In 1999, she was pregnant but she was not in good health and was not taken care of properly. As a result, her first child was thin and weak. He cannot go to school with his peers but had to give up halfway to stay at home to help his mother with earning a living. By 2010, she gave birth to a second child. But fate has not smiled to her, the second child was born with neuralgia and his hand is impaired. Although she tried very hard to treat her second child, his hands were not able to write and cannot go to school. Thus, every day, she has to leave her children alone at home and go to work to earn money.

“I have dreamed of a new home, which was enough to protect my family“

Talking about the difficult years of her parents when the whole family had to live in a temporary three-room house, she was crying: “My house has been half a century old, I have no money to fix it. That is my mother’s house. The house has leakages during rainy days. During sunny day, the sun is shining throughout the house. During stormy days, we are afraid that the roof is blown by the wind. Our cousins are so poor that they cannot help me. She further shared that she had long dreamed of a new home, which was enough to protect her family. However, with her and children, she still does not know how to fulfill her dream.

Knowing the anxiety and dreams of Hien, in 2018, TYM has supported 40 million to rebuild the house of the family. At the same time, TYM staff in Y Yen also called for the members of the group to join together, each contributing 20,000 dongs to complete the house as she always expected. Brothers and neighbors in the village also agreed to contribute some money. Finally, after more than three months of construction, the two-room roofed house was qualified to put into use. She was delighted to show us her new home. She thanked the support from TYM, the concern of departments, branches, VNW, TYM, other members in center 27 and relatives in the village have created conditions for her to have more spacious house for living. The house is also a great source of motivation for her family to strive to change their lives and to escape poverty. Talking about the plan in the near future, she said she had borrowed the land next to her relatives’ house to grow vegetables and raise livestock for her family.

The new roofed house next to the old house has not been beaten. It is probably a picture we cannot forget. The “Warm Shelter” is a source of great motivation for her family to strive to change their lives, escape poverty.

Together with Hien’s family, in 2018, 13 other poor households were members of TYM in many provinces receiving support to build “Warm Shelters”, bringing the total number of “Warm Shelters” TYM has delivered to 133 homes over the years.